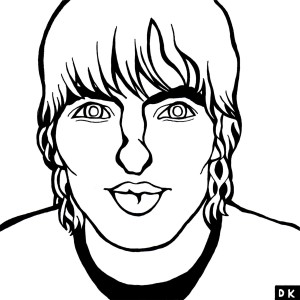 [Article and illustration from Lowbrow Reader #2, 2002]

For years, the best thing going on the silver screen has been Bill Murray’s rapscallion pair of eyes. Charmed in the manner of a sad-sack clown too cool to cry — even on the inside! — Murray’s mischievous eyes warm and amuse, granting audiences a one-way ticket to an all-inclusive in-joke.

After decades of dominance, this evil mensch and his glistening bastards have met a worthy rival: Owen Wilson’s nose. Smashed years ago into an anarchic, battered puzzle — an intriguing slab of aged play-dough rotting away at the center of this strange man’s face — Wilson’s rumpled snout winks to the crowd even as the rest of his face conjures bemused sincerity. Worn on Wilson’s male model of Zoolander, it’s a tacit punchline; appearing in Wes Anderson’s arty films it’s a cartoonish smile in a sea of sneers. The nose’s most triumphant moment remains its bit part in Meet the Parents, in which Wilson plays a kind of Gen X Ned Flanders. The actor tackles the role with a laid-back gusto worthy of the great Gene Wilder, cracking a window into his character’s eerie emptiness and self-hatred, but it’s the nose that leads the way, an inescapable blemish that tips his hand almost immediately.

Official word has it that Wilson broke the nose in a pair of football games, first in high school and later at college. This is, clearly, a fib: No comedic contrivance so potent could have such dull origins. So where did the broken schnozzle come from? Is it a ruse? A plastic-putty put-on — a 21st century take on the Groucho moustache — designed to shield an insipid waspish pug nose? Was it demolished at birth, inducing a Thurberish life of hard times and requisite responses? We think not. If you examine the curvatures of the nostrils, one thing becomes clear: Wilson’s bruise bears the distinct mark of a lemon cream pie, tossed through the air by a well-trained clown. It is with every twitch and turn that pie drips from Wilson’s elegantly marred mug, forever rumpled yet snazzy enough to take even Bill Murray to town.