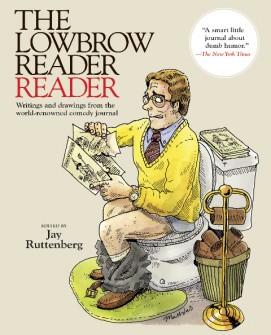 The Lowbrow Reader Reader is the first book from The Lowbrow Reader, the New York comedy zine. Edited by Jay Ruttenberg and published by Drag City, it gathers together the best writings and drawings from the journal’s first eight issues, along with a smattering of new material. Included inside:

Do yourself a mitzvah and order it today!