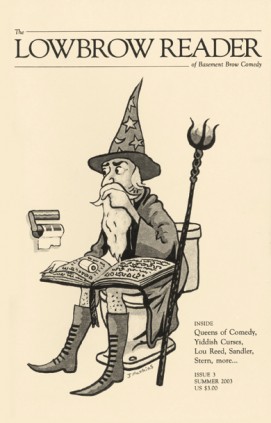 The Queens of Comedy On the Commandments of Sex 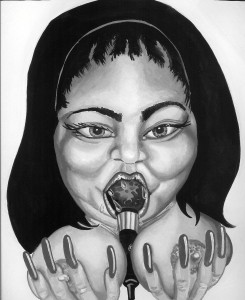 [Article and illustration from Lowbrow Reader #3 and The Lowbrow Reader Reader book.]
A couple of autumns ago, Glamour magazine assigned entertainment journalist Margeaux Watson to interview the four Queens of Comedy — Adele Givens, Miss Laura Hayes, Mo’Nique and Sommore — about sex. The specific assignment was to uncover the “10 Commandments of Sex,” as decried by the Queens. Armed with all the buffalo wings and bottles of Veuve Clicquot her expense account could manage, the writer met the quartet of comediennes in a Los Angeles hotel suite. Alas, it appears as if the champagne and chicken should have been left in New York: Glamour deemed every inch of the transcript too “blue” for its perfume-scented pages. Lowbrow, on the other hand, considers the interview just lewd enough….

Lowbrow Reader: As you all probably know, today’s assignment is to come up with the 10 Commandments of sex.

Mo’Nique: That’s rules three, four, five and six! Another rule: Must eat pussy! I know you can’t print that, but that’s rule number ten through 59. Must be a pussy-licker. Ain’t no pussy-licker, you gotta get away from me.

Sommore: I ain’t really into that. I’m selective about who I let eat my pussy because everybody don’t take care of their teeth.

Adele: Oral sex is an art. It’s kinda like rap and comedy: Everybody think they can do it but they can’t. And if the right person do it to you, you ain’t gonna never have it no other way. You gon’ be like, “You got to go [singing] downtown!” When it’s right, it’s like crack.

Sommore: Let me tell you something, a nigga will bust a goddamn root canal trying to make me come.

Adele: That’s cause he ain’t shit!

Sommore: No, that’s cause I use vibrators.

Laura: That’s another commandment! Don’t be scared of my toys.

Sommore: Involve food. I had somebody put some whip cream on me. Honey is nice, too.

Adele: Well, I ain’t got time for food. We eat before — we might go to dinner or something.

Mo’Nique: Nah, bitch! That’s not what she means. She means taking a strawberry and inserting it till the pointy piece is sticking out. Then you see his skills — if he can suck the whole strawberry.

Mo’Nique: Let a muthafucka eat a strawberry out your pooty-cat!

Sommore: Noise is a must. You gotta make some noise.

Mo’Nique: Yes! And you gotta talk the nastiest, filthiest shit you can imagine. Call me a bitch! Call me all kinds of bitches and hoes and sluts. Oooh! I like that! Call me a dirty bitch, nasty bitch, stanky bitch… And you gotta be a little rough. Hit a bitch in the back of her head. Pow! Smack my hair up. Kick a bitch in her back. Bam!

Sommore: Grab a bitch’s ass and spread her cheeks open. Do something surprising.

Mo’Nique: Bitch! You better watch yourself! Now, I have a thing with walls. You must be able to fuck on a wall.

Laura: That’s why I like a hallway — the wall in front of you is for you to balance on, but he’s behind you with his back against the other wall. You got all the power.

Mo’Nique: Can I say one thing? The ear means nothing! Don’t lick the ear. It don’t tingle. It don’t do shit. It’s like licking the knee cap. What the fuck are you doing that for?

Laura: The behind is cool.

Mo’Nique: Have you tried Altoids yet?

Mo’Nique: Put an Altoid in his mouth and let him suck it till it gets real small. Then let him eat your pussy. Baby, it’s a sensation!

Adele: Toothpaste, peppermint — all of ‘em do the same thing.

Mo’Nique: But Altoids is the best by far.

Sommore: You gotta be able to dance sexy. And sucking dick ain’t never killed nobody.

Sommore: And suck your own titties. Niggas like that.

Mo’Nique: You ever been fucked so hard it bring your period on when you was supposed to come three days later? You fucked so hard and then you look and you like, “Oh, damn! I’m bleeding. Shit!”

Mo’Nique: You ever been fucked so hard you don’t remember falling asleep? You don’t even remember that nigga pulling out?

Adele: I like to be raped like that. I used to get raped like that all the time, cause I can’t hold liquor. Tony [Adele's husband] used to give me champagne and I used to wake up butt naked. He had a thrill doing that. I’d say, “You’se a fucking freak!” I’d wake up and his DNA is all over me. I’m like, “What the fuck happened?” And he’s like [in a sweet voice], “I don’t know.” Well, ain’t nobody here but me and you, nigga!

Laura: [mockingly] Whose DNA is this?

Adele: He’d be passing me drinks. If you ever notice when me and Tony go out and I start drinking, he gives me all that liquor. He know what he gonna be doing. He do whatever the fuck he want to me, and I like it. When I wake up I don’t even know what you did, muthafucka, but it’s everywhere. You had a ball with my dead ass. I was laying there asleep.

Sommore: I swallowed one time and I had gas for the longest. But you know what? Men like when you pretend to swallow. Just let it go in your mouth and run out the side of your mouth.

Laura: It reminds me of castor oil. I’ve done tried it. I did my best. [Adele starts singing a negro spiritual] But it just won’t happen, and the only thing I can associate it with is when I had to take castor oil when I was little. I can’t get rid of it. I’m 51. I’m probably not gonna get rid of it. So don’t fuck with me like that.

Mo’Nique: I can tell if my man’s been drinking in his come. I can tell what he’s been eating. It has such a bitter taste to it and it stays with you forever.

Sommore: Be tight on your dick-sucking skills. See, I love sucking dick. I think it’s the bomb. I love it! I would rather suck somebody’s dick than fuck them.

Adele: You gotta love it. I got passion when I’m sucking your dick. This is the Popsicle, goddamit, that a bitch got when the ice-cream man came. You gotta have the same passion. It’s a commandment to women. Or hell, sissies.

Lowbrow Reader: Have you ever had sex with someone whose come had a strange consistency?

Adele: The muthafucka probably got prostate cancer and he don’t even know it. You be like, “You know what, dude? You need to go see your doctor. You ain’t even got no salt in your shit. Something’s wrong.”

Mo’Nique: Or they got brown come. You be like, What the fuck?

Lowbrow Reader: How about role playing?

Mo’Nique: I like that. Mine is a little insurance agent. He put his little suit on and carries a briefcase.

Sommore: My imagination ain’t that good.

Mo’Nique: You into just straight fucking.

Sommore: I like the dick. Really, that’s just it. I can come from sucking a dick. And this is another thing too: I can take you eating my pussy if you nasty. But if you just a regular ol’ church boy and you decide today that you gonna eat some pussy…. You gotta be a real nasty muthafucka and eat the pussy, if you gonna eat the pussy. And don’t play with my ass, either. I’ll tell you right now, if you lick my ass, I’m gonna look at you different tomorrow. I’ll look at your mama different.

Sommore: Nigga, if you lick my ass, guess what? I’m looking at you different.

Mo’Nique: No! Ass-licking is a commandment!

Mo’Nique: You muthafuckin’ right. Ass-licking is a commandment. You better lick my ass! And then, if you lick it well enough, I might let you put the head in. Lick my ass! That is a wonderful thing. Lick it! Ooooooh! Let me just say this: If they know what they doing, you can come from getting your ass licked. He ain’t never gotta touch your pussy!

Adele: You know why? Cause the asshole and the pussy — they neighbors. It’s all connected.

Sommore: You can lick it, you can chew on it, you can throw whipped cream and peanut butter and every muthafucking thing else, but I’m a look at your ass differently in the morning.

Sommore: I can get tied up, I can do all that shit. I love come. You can come all over me, I don’t give a fuck. I prefer if you take your dick out, take the rubber off and come on my ass, come on my titties, come on my face. You can do whatever, it don’t matter. But it’s certain shit, like licking my ass, that I just ain’t going with.

Lowbrow Reader: What about a finger in the ass?

Sommore: No. A finger in the ass is cool, at times. But you gotta really have me there. And I love seeing a man jack his dick.

Adele: Especially if you giving him a dance at the time, or some shit like that.

Laura: If she didn’t do nothing else, that little Saved by the Bell bitch in Showgirls worked that muthafuckin’ lap dance. Goddamit!

Mo’Nique: It fucked up her career, but she did her thing in Showgirls.

Adele: She was bad. She made me say, “You know what? I need to brush up on my lap dancing.”

Laura: That bitch got down in that movie!

Adele: You have to be into yourself, though. You got to turn yourself on when you doing your dance. You have to say, “I’m the shit right now!”

Lowbrow Reader: Do you believe that a dick can be too big?

Mo’Nique: No. If you can push out a nine pound baby, I don’t believe there’s a dick too big. I just don’t.

Sommore: I ain’t into real big dicks. I like nice size dicks. Once you start fucking a guy with a real big dick, you always gotta fuck guys with real big dicks. Then you become a size queen. You gotta go around auditioning muthafuckas to see if his dick’s big. And I don’t want no big pussy.

Laura: I was with this guy before I was married and he had a real big dick. And I was on this gig — it was with Bernie Mac — and all of a sudden, right before the show, my uterus was flipping back. It can get knocked outta shape and when it comes back it’s a painful muthafucka. Bernie and his road manager were like, “What is it? What can we do?” But I couldn’t tell ‘em I had fucked a nigga with a big dick and my uterus was flipping back!

Sommore: I ain’t into no small dick, though. I don’t even entertain that.

Laura: A little dick can be okay because sometimes a little dick can hit that G-spot. It don’t necessarily go all the way in but it’s rubbing right at that little section, causing friction.

Adele: I’m like Sommore. If your dick is too small, my favorite position is with another muthafucka. Come on, now. A little tiny dick is a waste of time. He need to get with an Asian woman. Does Glamour magazine use this kind of language?