Today I was at this Beer Hall Putsch, which is kind of like a big event-slash-revolt against the government. Anyway, I met the cutest guy there—I’ll just call him “A.H.”

So we got to talking and he goes, “Don’t you just hate the Treaty of Versailles?”

And I said, “Omigod, you hate the Treaty of Versailles, too? I can’t stand it!”

And he’s all, “I know! We Germans can’t do anything. It’s like, we can’t raise an army, we have to pay reparations, and we have to take the blame for the war. Like it’s completely our fault!”

Then I’m all, “Excuse me, but it was a world war! It’s a little more complicated than that.”

We were so on the same page and I think he thought that I was kind of smart. The problem is, he was arrested for treason and imprisoned. I’ll probably never see him again….

Two ships, or whatever…. 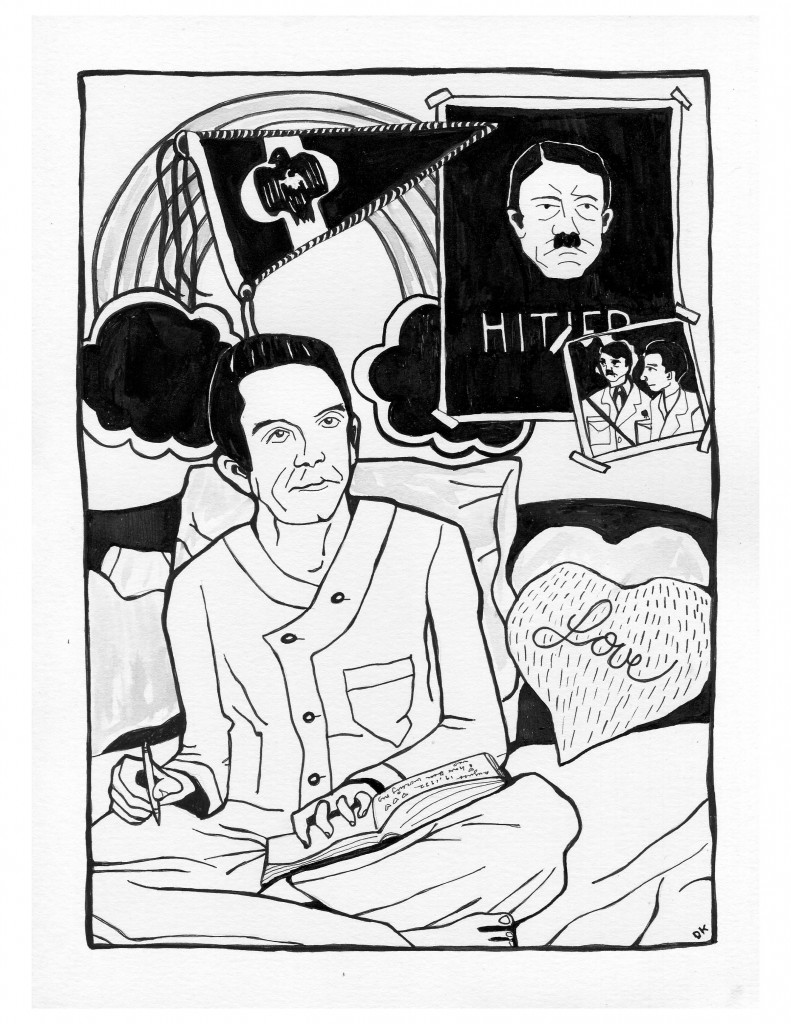 I have been working my ass off on A.H.’s election campaign. You should see how hot I made him look in the posters. Parting his hair on the side really brings out his eyes and I’ve used pictures that make him look really tough and strong—the kind of guy who could conquer Europe—yet compassionate, like someone you would leave your kids with…unless you’re Jewish, ha ha. (I’m so bad!)

I’ve been crazy busy trying to get the stupid German people to understand how brilliant A.H. is. I mean, OK, sometimes young girls throw themselves at his car, but they’d do the same for Conrad Veidt or Emil Jannings.

They’ve got to worship him like I do. So—I’ve taken over all the news media and organized rallies, holidays, and parades. I just wish A.H. would appreciate me. I mean, I don’t mind if everything revolves around him, I just wanted him to recognize how much I do for him.

Anyway, just at the height of my “poor little Joseph” phase, guess who got appointed Minister of Propaganda?

Of course fatty-pants Hermann Göring was made Minister of the Interior, and I heard he even called me a “glorified event planner.” But A.H. says I help him control what people think, so Minister of Propaganda is way more important.

Omigod. I can’t believe what’s happening! Guess who’s hosting the 1936 Olympics? Germany! I’ve got so much to do, so many countries, so many events, not to mention—more parades. This is going to be the best Olympics ever!

My only reservation is that it’s going to be filmed by that no-talent whore, Leni Riefen-bitch.

How does this sound? Joseph Goebbels Hitler…Mr. Joseph Hitler…Herren Joseph and Adolf Hitler…Joey and Dolf….

Anyway, I had just staged this spontaneous outbreak of violence against the Jews and we had burned down, like, two hundred synagogues, so we were trying to come up with a snappy name for the event and I ask A.H., “How about ‘Crystal Night?’” because of all the breaking glass and such.

So Himmler goes, “Crystal Night? What is that? A pogrom or a Nazi stripper?”

Of course his lackey Heydrich nearly bust a gut. I hate those guys.

A.H. took a meeting with the French and the British, so he tells them, “You know, the Sudetenland isn’t really supposed to be Czechoslovakia. Everyone there is so German, if you just give us the Sudetenland, we’ll totally go away and never ask for anything again.”

And Neville Chamberlain was all, “Really? You won’t go goose-stepping into Poland or France?”

And A.H. was like, “Me? I just want the German people back together. That’s all I care about. In fact, here’s a piece of paper that says, ‘PEACE IN OUR TIME.’”

So Neville went back to England and started showing off the paper, and A.H. took over all of Czechoslovakia! Neville Chamberlain is so gullible!

I have spent, like, 15 years getting one point across: Communists will take away all of your stuff, Jews lead to Communism. It’s A.H.’s main political theory. It’s what I’ve always loved about him.

So how the hell do I explain this pact with the head Commie, Stalin? Even the stupidest German is going to see through this one. How much spin doctoring can one guy do? God that man does not make it easy for me.

Only ten more shopping days ’til A.H.’s birthday. What do you get someone who has conquered everything? I told that to him and he laughed his ass off. By the end of the day, everyone at the Reichstag was quoting me.

Himmler was just put in charge of the “Jewish Question.” I’m not going to get resentful, but I just have to say one thing: Whose idea was the book burning? Mine. Thank you.

I haven’t written in a while ’cause things have been just crazy lately. A.H. came to his senses and attacked Russia, but fighting a war on two fronts is really hard, plus we’re not just fighting, we’re trying to cleanse Europe of Jews and that takes up a lot of time. Also, Russia is really big and a lot colder than we thought.

A.H. is getting depressed. He’s even put on a few pounds.

Meanwhile, the so-called “Desert Fox” General Rommel was getting wailed on in Africa, so A.H. told him, “The choice is victory or death.”

But Rommel surrendered instead of killing himself. I think committing suicide for your Führer is like oral sex—you should do it because you want to, not because he asked you. It’s just not enjoyable if he has to ask.

Those sneaky bitch generals planted a bomb under the table where A.H. was looking at his maps. It exploded, but he’s fine. I’m freaking out, but he suddenly feels invulnerable. I think it shocked him out of his funk!

So what does he do? He invites Mussolini over to tour the bombed-out room. You can tell Mussolini has no respect for A.H., but he keeps trying to impress that stuck-up, guinea monkey. It’s so pathetic.

The Russians are right outside Berlin. All night long you hear the bombs, but as far as I’m concerned it might as well be birds singing because my dream has finally come true: A.H. has asked me to move in! I’m bringing my stuff down to the bunker. I have to decide which suits to take. I’m so happy, I can’t believe it. I’m the only one he’s asked. At last I can feel secure (except for the Russians).

Today we intercepted a BBC broadcast and guess who’s trying to make a deal with the Allies? Himmler! Going around acting like he’s the next Führer and offering to free half a million Jews.

A.H. was livid. I’ve never seen him so devastated. I hate to say I knew it. I knew it all along.

A.H. just wanders around the bunker in a daze. The only thing he likes doing anymore is having Albert Speer come over to make pretend cities with him. The more towns the Allies bomb, the more toy models they build.

I am really pissed off at the German people. After all the countries A.H. conquered for them, you’d think they’d try to do something ballsy like the English did at Dunkirk. But if they can’t defend Berlin and save their Führer, then maybe they don’t deserve to be a master race.

I’m so depressed. Today A.H. took cyanide and shot himself. I keep thinking about the last time he left the bunker, it was to give medals to some Hitler youths. Seeing him with the little eleven- and twelve-year-old soldiers, I couldn’t help thinking, “He’s so good with kids. If only things could’ve been different for us. If only we could’ve lived in a perfect Aryan world with beautiful children together.”

Speaking of children, I better go kill mine. He would’ve wanted it that way.