Over the years, I have drawn Shemp Howard many times: for the cover of my first comics anthology; for various books, magazines, and prints; and (for some inexplicable reason) for the cover of the defunct sex rag SCREW. I’m often asked, “Why do you love Shemp so much?” Let me clarify my feelings.

I’m a lifelong Three Stooges fan. I have always adored them, and they still make me laugh. I love all of them, even the two Joes—Besser and the much maligned DeRita. The latter fit the bill, at least physically, when he was recruited to join the aging Moe and Larry late in the game. No one could compare to Curly or Shemp as the “third Stooge”—those were impossibly big and funny shoes to fill. But as Curly Joe, DeRita did his own thing, with subtle gestures that were easy to miss if you were not watching closely. 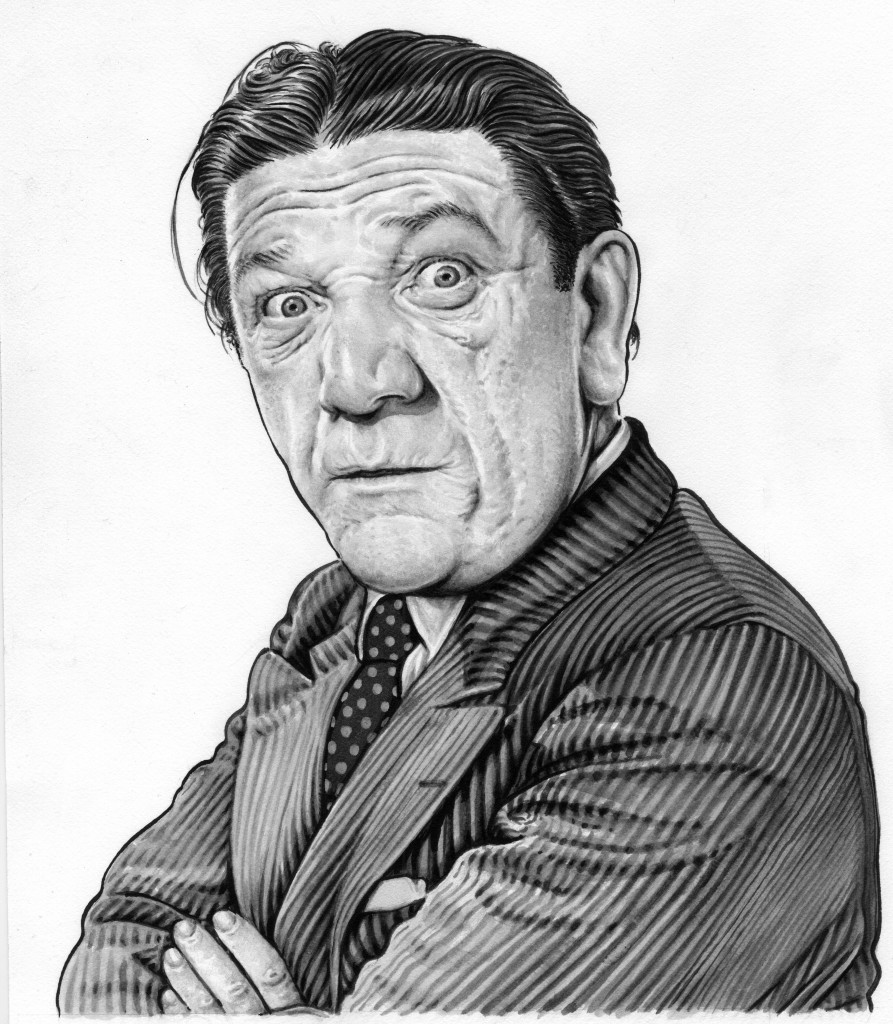 I adore Moe. No comic actor has been angrier (with little or no provocation) and funnier at the same time. I’m fascinated by Larry, the thinking man’s Stooge, the (usually) innocent Stooge in the middle; as my friend Eddie Gorodetsky has pointed out, he is the audience’s surrogate. And Curly was beyond funny. He was so brilliant as a comedian that he was not even identifiably human, almost from another planet.

Then there’s Moe and Curly’s older brother: Shemp, born Samuel Horwitz in 1895. Shemp is the Stooge with whom I was always most intrigued. He looked real—maybe the drunken guy you would see at large family gatherings (weddings, Seders, bar mitzvahs). Always drinking, dancing, flirting, carrying on a bit too much. While the other Stooges looked like professional comedians—broad caricatures of human archetypes—Shemp was accessible, a regular guy you might see working in a crummy restaurant, a crummy shoe store, or a crummy cigar store. He did have a comedian’s face, but with his black, greasy, parted hair and short, stocky build, he came across like a crazy New York neighborhood guy who had wandered onto the movie set.

I love drawing Shemp’s face. He has been called “the ugliest man in Hollywood” (a title he enjoyed). True, perhaps. But he was dapper, and I have always seen and championed the beauty in ugliness. There’s no face I enjoy capturing more than Shemp’s in its hysterical, wild-eyed, pockmarked glory.

And there’s the name. Shemp. It’s a beautiful, unique name/word/sound/croak that fits and becomes him, and only him. My wife Kathy and I have no children, but if we did, one of them—boy or girl—would be Shemp Friedman. There are other Moes, Larrys, Curlys, and Joes. There is only one Shemp.